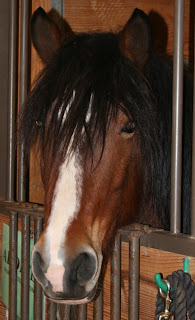 ...but I'm having an affair with Moonshadow. He was found this winter as a stray stallion, wandering the back roads with a gelding buddy of his, and turned in to the folks at the Rescue Ranch. He's no longer a stud, but at five years old, retains his "studly" personality in many respects.

I met him last month when I was out there taking care of my steady volunteer job, keeping order in the tack room. One look from him and I was a goner. I spent half an hour or so with him yesterday, grooming him and snuzzling with him. It was wonderful, and I do feel just a tiny bit guilty....

A friend of mine commented today, "It's that shaggy bad boy look that gets you every time, isn't it!?" Blushing, I had to agree. But it's more than just his looks. There are lots of pretty, shaggy horses out there. Moonshadow has something special.

Although lots of women might disagree with me--I haven't researched this yet--I think there is a definite sexual component to the attraction between women and horses. It's not sex in any strange, perverted way--I"m not talking about physical sex. It's an energetic thing.

For me, walking up to Moonshadow and having him sniff my face was reminiscent of times when a really attractive man walked into the room and gave me "that look." It was a kind of all-over tingle, the kind that makes you touch your hair, drop your eyes, and smile. Anyone know what I mean? It's what comes before the real, physical, sexual part of the attraction. But it's powerful, at least for me.

Yes, Galahad did that for me, too, when I first met him (and he still does, sometimes). Galahad was also a stud at that point. So it's possibly related to a kind of stallion energy. I really don't know. But I do know I've never been attracted to a gorgeous mare in that way, nor to most male horses, stallion or not.

Anyway. It's interesting to me to wonder about. Anyone else know what I mean?
Posted by Kay at 1:38 PM No comments: