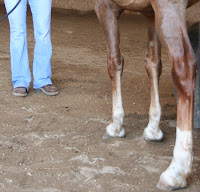 Well. After all this time, I’m finally going to have to admit that my horsemanship skills are pretty good. Here are three instances from the last two weeks that have forced me to admit it.


First of all, I’ve actually been riding some of the horses at the Ranch, in spite of the fact that they’re “green,” and I've done well. Jay has been complimenting me on my willingness to get on these horses and ask them for a quick response—and to get it. That’s huge, for me! Actually, come to think of it, that’s pretty huge for anyone who’s not a long-time horseman ... and maybe for some folks who are.


I even rode “Duke,” a stubborn little Connemara pony the other day. He's been ridden quite a bit by his previous owner, but the little stinker has little or no stop, not much backup, and his lateral controls don’t work super well. However, he does a one-rein stop and, once he’s sure you’re not going to give in to him, he steers fairly well. We walked, trotted, did figure-eights, and worked on improving the “whoa.” I had a great time (and I think he did, too, though he’d never admit it). By the time we quit, he was doing those figure eights at a trot and moving almost entirely off my seat and posting cues. Way cool!


Then that same day, I had an amazing experience with the little walkaloosa I’d been riding. He spooked at a piece of paper blowing down the barn aisle as I was backing him out of the arena.


The barn aisle was clear—I had looked before we left the arena. I didn’t see the paper at first, though I knew he was spooking at something. I sure as heck wasn’t going to stop to find out what it was, thereby reinforcing his thought that it was going to eat him for lunch. I just kept asking him to back up—into whatever it was. Then, as the paper blew past him, he levitated—all four feet left the ground—but he carefully did not come toward me. Rather, he went sideways to avoid both me and the paper.


My heart rate didn’t even go up. That’s not something that can be controlled through willpower—but evidently I have gained enough experience to know, in the moment, whether or not I need to be afraid. I never even changed my stance—still with my head slightly forward, eyes and energy focused on his chest. As soon as he landed, we continued backing down the aisle to his stall.


And boy, did he back up like a dream! Head low, moving straight down the aisle, looking neither right nor left. Good boy! He didn’t “recover himself” until we got him backed into his stall—then, feeling secure once more, he challenged me a little bit, but not much.


Jay saw the whole show. His comment, afterwards: “That’s horsemanship!” I was so proud of myself!


Then yesterday at the Ranch I was planning to spend the day writing an article, but Jay grabbed me as soon as I walked in and handed me a horse to check out. “Dancer” is a lovely little mare, sorrel with a flaxen Fabio mane and tail.


I didn’t know it at the time, but this is a mare who has reared and gone over backwards several times since she arrived. She is the first horse I’ve encountered who wouldn’t do the easy yield-and-backup game that we use at the Ranch. She refused, at first, to yield either end! So I spent over an hour with her, getting her to disengage front and hind, and improving her backup. In between practices, we walked through and around obstacles in the arena, which she handled very well, head down and calm as could be.


Jay, who had been working in the round pen with another horse but who has eyes in the back and sides of his head, came over as I finished with her. “I hope you know how proud I am of you! You may not realize what a big thing you’ve accomplished there.” Then he told me about her history.


I felt great about it! And I did realize just how far I’ve come in the last ten or so months. That “Lead Intern” title is well deserved, I guess I have to admit.
Posted by Kay at 10:30 AM No comments: 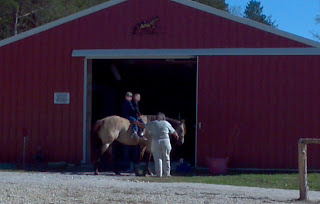 Galahad continues to astonish me.

He's been chosen as a "poster child" for a local organization, and yesterday was the video session out at the barn. Three solid hours of "Stand over there, please." "Can you say all that again?" "Can you get him to come up and nuzzle you while you're talking?" "Can he walk by in the background?" "Can we do that one again?" "Can you show us your regular morning routine?" "Can we show him frolicking with his friends?"

Galahad never turned a hair after the first five minutes. Five minutes? That was what it took him to get used to the video camera, the cameraman, the strange, umbrella-like lighted thing, the close proximity of the house (where he's never been before), the sound of the rattling equipment case.

What impressed me the most was that he was obviously nervous about all of it at first, but he just kept looking to me for reassurance and guidance. He trusts me that much! It made me feel wonderful, knowing that our relationship is so solid that he's willing to endure some pretty scary stuff if I tell him it's OK.

He only had one worrisome moment, when he snorted and backed away. That was the time I turned his lead rope over to someone he wasn't used to. He didn't actually do anything, but it was obvious that he was NOT OK with the idea of anyone but me calling the shots where he was concerned!

After the video crew left, Galahad had one more chore to perform: our friend had brought her two little boys, ages 7 and 8 or thereabouts, out to see the horses. Galahad, who has never had a little boy on his back, let alone two at once, gave a "pony" ride and was a perfect gentleman.

He wasn't too sure about the whole thing, but with the mom on one side, another adult on the other side, and me leading, he walked quietly. Even with the boys playing "one, two, three...WHOA!" amid gales of giggles and squirms, he stopped quietly or just kept moving when I told him to, calmly and gently.

What a guy! He's this good at five years old--he's going to be amazing when he's ten! A real jewel....