Galahad worked very hard today. He's a smart horse, a willing horse. What's more, he has heart. This horse is one of those who would do whatever you asked of him, to the very best of his ability, until he dropped from exhaustion. These kinds of horses are all too easy to take advantage of.

I think that's what happened today. We were so excited about all the new skills he was learning--tucking his head, jumping barrels, learning to allow a rider on his back--that we forgot he's just a youngster. We forgot that he's never been asked to do more than stand around in his stall except for the three times a week he got to go run around in a pasture with his buddies and eat grass. This is not yet an athlete.

The fault is mainly mine. I saw how tired he was getting, and I hinted at it to my trainer friend. "Say, how do you know when a horse is getting tired?" Later, I pointed out how his lower lip was starting to sag from fatigue. Yes--but did I say, "Hey. Let's stop now--he needs some rest"? Nope. I deferred to my friend, who is 1) male and 2) in a position of "authority" because he's a trainer. I forgot that he's also 1) a man (which, through no fault of his, automatically makes it more difficult for me to speak what I know), and 2) tremendously excited about the prospect of working with such an intelligent and willing horse. My friend would never do anything to harm this or any horse, but he might, in his excitement, overlook the signs, or ask more than might be best for Galahad himself.

It's my responsibility to speak for my horse. I won't forget that again. No harm done--our guy will be a little stiff tomorrow, but he'll be just fine. But it's a lesson for me.

Horses Have Bad Days, Too 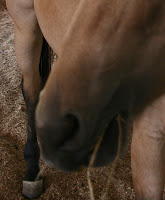 Yesterday I was completely convinced that Galahad was having second thoughts about our relationship and wanted to go back home to the rescue ranch. Actually, I thought he hated me. He was grumpy, wasn't interested in walking around with me, didn't want to let me put a halter on him, wouldn't drop his head for me (something he's very good about, normally), refused to back up without an argument. He wasn't sick; he was just in a bad mood.

Today he's fine. As I sat in his stall drinking coffee, he was his usual sweet, curious self. So I guess we humans aren't the only ones who sometimes wake up on the wrong side of the bed.
Posted by Kay at 8:55 PM No comments:

I've been having trouble persuading Galahad to lift his feet for me so that I can clean his hooves. I've tried all the "proven" ways to do it, and most of the time, he just ignores me. Today I asked Jack, one of the men who takes care of the horses, for help. He came into the stall, cozied up to Galahad, leaned into the horse's left shoulder, and pressed his fetlock joint. Up came the foot. Magic, I swear. The left rear followed, with Jack's left hand sliding in and around Galahad's pastern. Up came that foot, too. Hmmm.... Right rear, then right front, all without incident. Made me feel kinda silly.


But once I thought about it, I wonder if, because of my crummy technique, Galahad just wasn't sure what I wanted him to do. I tried it again, mimicking Jack's technique as best I could, and lo and behold: up came the feet, one after the other. It felt really good.

It’s been wonderful spending time with Galahad this last week or so, getting to know each other. I have a little folding chair that I put in the corner of his stall, and I have spent hours just sitting there watching him. He’s very curious, and it’s an amazing feeling seeing that huge head coming down toward me, sniffing and whuffling and breathing on my face and hands. I like watching him eat and sleep and doing all his normal, horsey things.

Tuesday afternoon, though, I noticed him eyeing me when they brought in his grain. At the time I was sitting in my chair, and I didn't move or do anything. He seemed to think it was strange that I didn't challenge him for the food, and he looked like he was debating what he wanted to do about that. Not that he did anything at all, but you can tell when a horse is pondering something.

I thought about it later in the evening, and decided it wasn't a good idea to handle things that way. Yesterday, I brought his grain in myself, and when he got pushy about coming to get it, I made him back completely out into his run. He thought about challenging me, but decided against it, and a few snaps of my fingers had him behaving much better. He's way too easy. I want to keep it that way! I don’t want him to ever discover that he outweighs me by about ten times.

Mares teach their foals who’s boss in just this way. A mare never “spoils” her colt—she teaches him manners and humility from Day One. Mares actually lead the herd: the lead mare decides where the herd goes and when, and the others, including those showy stallions, follow her. So I’m learning to be the Lead Mare here.

It would be so easy to spoil this little guy, because he’s so sweet. But a spoiled, pushy, thousand-pound animal is dangerous, no matter how cute he is. So I’m learning to be assertive.

Galahad arrived early Tuesday morning, trailered in by the director of the rescue ranch fifty miles away, in the midst of a thunderstorm. He was nervous, but stepped out of the trailer quietly and stood in the arena while we signed papers. Then the director drove away and I was left holding the lead rope of my very own horse.

Since Tuesday, life has changed. I have spent my days with him, my nights dreaming about him. His sheer physical presence is astonishing; the responsibility for caring for this loving, friendly, and beautiful animal and turning him into a safe and respectful companion feels, at times, overwhelming. But Galahad is the most willing horse I can imagine--he seems, truly, to want to do what I ask. Despite his young age, he's not particularly flighty or willful, and once he figures out what I'm trying to get him to do, he does it eagerly.

So our new life together has begun.
Posted by Kay at 9:27 AM No comments:

Another Visit With Galahad

I thought this only happened in fairy tales or Disney movies, but it really does seem that this horse chose me to be his special person. Not only did he stick his head through the fence and fall asleep against my chest the first time we met, but today, when I went with a bunch of other folks to bring the horses in from the pasture, he walked right over to me. Not to the other people, whom he knows much better, but to me, without my saying a single word to him.

It was an amazing feeling. I clipped the lead rope onto his halter and led him back to his stall in an indescribable state somewhere between joy and awe.

He arrives at his new barn on Tuesday--the rescue facility will deliver him early in the morning. From then on, he's mine for keeps. I don't think that's sunk in quite yet.
Posted by Kay at 7:22 PM No comments: