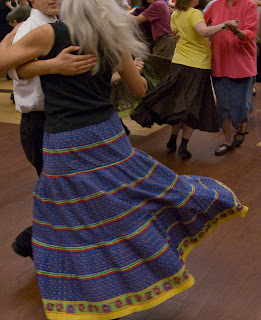 I think about dancing almost as much as I think about horses, in case no one has noticed, and lately I find myself thinking about riding while I'm dancing. Probably just as well not to let my partners know that....

I had the pleasure of dancing with three of my favorite partners Sunday night. They really gave me something to think--and blog--about. It was so interesting to pay attention to what was going on in my body during the dance.

The first gentleman asked me to dance shortly after I arrived. He and I have danced together for a long time. This particular evening, for whatever reason, he wasn't up to his usual form. His lead was a little late; his feet weren't where I expected them to be. As a result, when we first started, the dance felt "off." But we kept at it. I put a little more energy into my own dancing, and he actually seemed to pick up on it.

By the time the dance finished, we were nearly back to our usual proficiency. I wonder, is this what my horse experiences when I have a bad day? After a ride, I, as the rider, am usually feeling much better than when we started.

The second gentlemen, who studies ballroom dance and is the most technically proficient of the three, asked me for a waltz late in the evening.


There were a couple of times when he’d cue a move and I’d realize I had absolutely no idea what he was doing or where he wanted me to be. None. But it worked out anyway, and here's why (IMO, of course):

If I were a less experienced dancer, I would probably have hesitated there, not knowing what the cue meant. But experience told me to keep moving.

Also, I knew my partner was an excellent dancer and a strong lead. I was able and willing to trust him and move forward without knowing where he was sending me. Very important point: If I had not trusted him, I would have stopped, like a horse refusing a jump. It's happened before, with other partners. Most embarrassing for both parties!

So at those those times of not knowing, I just kept moving, trusting that I had understood the cue and that he knew what he was doing. Sure enough, there he’d be, at just the right instant to pick me up and move us into the next phrase.

The third gentleman, always fun and inventive, asked me for a tango. He and I have done a few Argentine tango lessons, but neither of us is terribly good at it. All dance, but especially this form of tango, requires an exceptionally precise lead and follow. There are no programmed steps, which makes it both challenging and great fun.

As we danced (and we danced very well!), I was aware of every signal, every hint, of the direction my partner was moving. This gave me direction and timing. Because we're not experienced and don't dance together often, I was also aware of my own fraction-of-a-second hesitation while my body--NOT my head--processed the information and moved. It was fascinating, and gave me a greater insight into what my horse experiences when we ride.

And it was magic. Pure magic. I want to ride like that.
Posted by Kay at 10:13 AM No comments:

A funny thing has happened recently: I'm becoming a rider. Sounds strange, I know...haven't I been riding for quite a while now?

Yes and no. I've been riding, but only horses I know well, or "lesson" horses, who are said to be safe to ride. But certainly not the green-broke horses at the Ranch. I've been afraid to get on those, for the most part.

I have been riding, and taking lessons, with an excellent local (but soon to be nationally known) trainer. Her specialty is the Monte Foreman "basic handle," which schools the horse as it gets the rider used staying balanced while the horse makes sharp but controlled turns.

So I have been getting myself ready, working up my nerve, but still saying no every time Jay suggested I ride one of our horses.

But yesterday the amazing thing occurred: when Jay urged me to ride a little "walkaloosa," two and a half years old and 13-odd hands high, with maybe half a dozen rides on him, I agreed.

I had worked with him on the ground quite a bit, and he was behaving very well. He had demonstrated that he was willing for me to ride him, by moving willingly and freely on a lead line, no matter how much speed I asked him for, and then relaxing once I let off the pressure.

So I saddled him up, worked him for a bit longer on the ground, and then...got on.

Yesterday, he argued quite a bit, but I insisted, politely but firmly, until he gave in. I mean, really, fella, all we're doin' here is followin' your nose.... It was a short ride--maybe ten minutes--and we never moved past a walk.

Today, we had our second ride, once we'd gotten our ground-school review out of the way. And we did fine! Jay even complimented me again today on how well I communicate with the horse, and how I was willing to engage him in some pretty energetic moving of his hindquarters, where other riders haven't been.

Best of all, I felt confident, secure, and capable. The little horse was willing (mostly), and we actually moved up into whatever it is that's just faster than his "trot," or whatever that gait is on a "walkaloosa." It felt like a tiny, fast-but-smooth canter. Reminded me of a paso fino that I rode once--feet moving ninety miles an hour, ground speed about a quarter of a mile an hour....

So, success on many, many fronts. Think I'm most happy with the feeling I have about it: such a boost to my confidence. Can't wait for the next ride!
Posted by Kay at 6:57 PM No comments:

I went to a Sunday night Waltz Party a while back. Especially because of my work with the  horses, I paid attention to how I follow my partners' lead.

Several of the women dancers have asked me to help them follow better, but I've never been able to give them pointers. That Sunday night dance showed me why: I have absolutely no idea how I do it.

The best answer I can come up with is that I follow the path of least resistance--if my partner raises his arm in a certain way, it feels easier to twirl under in one direction rather than in the other. But it happens instantly, and I can't tell you in words just how I know to do it.

I bet this relates to the way horses learn our cues. A horse doesn't feel your leg on her side and then say to herself, "Well, that's Leg Position One on my right side, so I'm supposed to step over with my right front leg." But in the end, with a good rider, that's what they learn to do. They, too, learn follow the path of least resistance, moving without thinking about why or how, like water flowing downhill.

I think I follow my partner's lead in the same way. I come to associate a certain touch with moving in a particular direction, but it's a body knowledge of the easiest and most comfortable way to shift my weight, not a head knowledge of what the next step should be. What I've discovered over the years is that if I stop to think about what I'm doing in the dance, my feet stop moving correctly.

Some dance partners are better than others. With some, I dance well; with others, it's more like a battle of will and balance. There have been a few with whom I simply cannot dance. On one unpleasantly memorable occasion, I came to a complete stop in the middle of a waltz, balking without thought like a horse refusing a jump. To this day I don't know why that happened. That gentleman has never asked me to dance since--likely a wise move for both of our sakes!

Dunno. But it's interesting. I think this understanding may help me be a better rider.
Posted by Kay at 6:19 PM No comments: