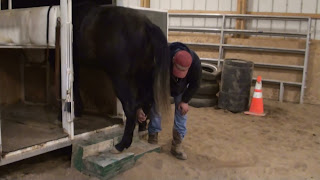 I was privileged to witness an unexpected and dramatic change in attitude in one of the horses we're working with out at the Ranch.

Liberty, who was found chained to a tree where he'd been forced to live for some time, had an understandably bad attitude toward life in general and people in particular. The best word I can think of to describe it is sullen. He really wanted nothing at all to do with us.

A couple of months ago, before we realized just how bad things were with him, Jay let me work with him. It was soon obvious that my lack of skill was making the problem worse, not better. Liberty would pull away, and I'd pull back. Liberty would turn his butt to me in the round pen and, in trying to correct that misbehavior, I'd get him running hell-for-leather and not be able to get him calmed down.

I was actually relieved when Jay took over his training, because I didn't have the skills to help this horse past his problems. Even Jay had a tough time with him. The horse became more willing to do what he was asked, but his basic sullenness remained.

One afternoon, trying out his new trailer-loading technique, Jay decided to use Liberty as a test case. After only a few minutes, Liberty loaded right into the trailer without a fuss. Success, right?

Liberty would not back out of the trailer. Putting a foot out and stepping down into what apparently seemed like an abyss was not something the horse was willing to do. Nope. No way.

For well over two hours, I watched Jay work with the horse. Jay's voice tone and energy never altered during that entire time. In the end, Jay built up a couple of steps behind the trailer so that the drop-off wouldn't be so deep. Liberty let Jay pick up and position each back foot, gently pull on his tail to get him to set weight on that foot, and then move to the next one.

It was, literally, one step back and two steps forward at times, as Liberty got scared about the process and retreated into the trailer. But in the end, all four feet were on the arena floor, and Jay led Liberty away.

I was fortunate to have my video camera there, so I caught the entire process. It is amazing to watch (at least if you're a horse trainer, or you enjoy watching grass grow...). More interesting than the actual process, though, is the effect we've seen on Liberty himself.

As Jay was working with him that day, we speculated that the process of getting him out of the trailer, so difficult for Liberty, might be the emotional equivalent of laying him down (see my blog post here). We could tell that the horse, by the time a couple of hours had gone by, had actually figured out that we were trying to help him escape from a frightening situation, and was allowing Jay to position each foot.

And in fact, we have seen a transformation in Liberty's attitude. He's no longer sullen. He hangs his head out of his stall door, asking to be chosen to come out and work in the arena. He's turning into a lovely riding horse, good-natured and willing. 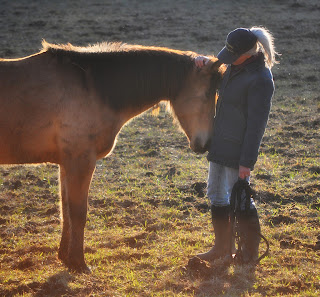 This internship is emotionally draining at times, mostly because the amount of information I'm trying to absorb is enormous. On days like today, it feels like trying to get a drink out of a fire hose.

That is not a complaint, just a statement of fact.

There are disadvantages to starting this kind of learning adventure when one is sixty, and one of those disadvantages is that I don't have nearly the energy that I had a decade or two ago. On the other hand, I have much more life experience, much more humility, and much more ego strength than I had in my younger years. All of those things have proven their worth a thousand times over in the last three months.

I am too tired even to write. But this photo, taken by a dear friend, shows why I'm driven to do this work, and what the reward is when I get it "right." I am so very blessed.


Photo by AimingHigh Photography
Posted by Kay at 6:29 PM 2 comments: