A Reason to Focus 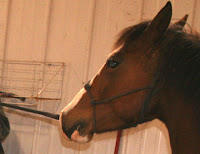 This was originally a much more detailed post, but I realized that the details of what happened don’t matter. Rather, it’s my response to the situation that’s important.


Horses leave the Ranch with a willing attitude (we won't put them up for adoption until they demonstrate it) and the experience of clear, respectful communication. That’s what we teach them. The “down side” of that is that the horse learns that it is possible for such communication to take place. When they reach their new homes, they all too often encounter something quite different.

Our adoptive owners, while they unquestionably love their new horses, are usually not experienced in how to communicate respectfully with them. We teach them as much as we can before they take their horse home, but often that’s not enough to overcome their inexperience and the “old-school” methods that prevail at so many barns. Owners accept advice from the experienced owners and riders around them, most of whom are not skilled in relational horsemanship techniques.

“Old-school” isn’t wrong; I’m not saying that. It’s just different, and makes a different set of assumptions about the horse/human relationship: horse as useful animal versus horse as friend and partner.

The result, sometimes, is that the horse, having learned to expect a certain level of communication, takes offense when that’s not what it experiences. It’s not the fault of the owner, who has no idea what’s suddenly “gone wrong” with his beloved new friend. Generally, the horse gets blamed for its “bad attitude,” and no one understands that what’s really happened is a failure of proper, respectful communication between horse and owner.

My recent experience with “Toodles” was a perfect example. Our new apprentice, just learning (it was her first day!), wasn’t respectful in the way she asked Toodles to flex, and the horse took offense. The result: a fight, and a situation that likely would have continued, or gotten worse, if someone hadn’t been there to correct it.

We had a similar situation crop up last week with a recent adopter. My first reaction was to get discouraged and depressed. That’s clearly not helpful. After a lot of soul-searching, I realize that, in fact, the situation is a good reminder of why Jay and I work so hard at what we do at the Ranch. It reminds me to stay focused and continue our work of educating owners and riders, one at a time.
Posted by Kay at 10:03 AM No comments:

A lesson in manners 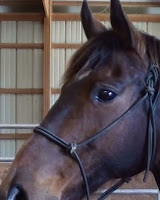 My lesson for today was softness. I was working with "Jenny," one of our new apprentices, helping her learn the basics of haltering a horse and asking it to flex its neck to each side. “Toodles,” an older mare who’s said to be very easygoing, was our test subject. Jenny got Toodles to flex to her left, but when she moved to the right side, the horse started fighting against her. I tried to talk the young woman through the process, but with no success, so I took the lead rope and the horse fought with me, too.


Interesting. The horse knows this maneuver, but we had apparently offended her with an approach that she considered impolite and disrespectful. My guess is that Jenny hasn’t figured out what “softness” means, and Toodles took offense at having her face pulled on. It’s not at all uncommon for a horse to do that. Generally, people fight with them about it, and things go from bad to worse. The result: a “bad” horse. Not really….


After a while, I sent my apprentice friend off to watch Jay and the others, and attempted the “fix” myself. I probably should have let her stay, but didn’t want to teach her anything wrong. One of these days I’ll start trusting myself more.


Since asking her to flex in my usual, polite-but-assertive way was only getting a fight, I decided to go back to basics—real basics—and lots of softness. I took up the lead rope, slid one arm along Toodles’s back, and with the other hand, slid down the rope toward her face. As gently as a whisper, I asked her to move her head out and back toward me, and rewarded her for every twitch in my direction by releasing the pressure for a second. The first time she gave a significant amount, I dropped everything and walked away from her. Confused, she followed me. Where was the fight she was expecting (and maybe looking forward to)?


I tried that a few times, and with persistent gentleness, got her all the way back to touching her side with her nose, on both sides. It did take me 20 minutes, and when she finally did it willingly, I took the halter off and left her. By then, she followed me to the stall door and hung her head out to be scratched.


Jay’s only critique was that I should have finished by asking her the “regular” way—but my confidence isn’t quite there yet, and I didn’t trust myself not to get into another fight with her (surprise, surprise!). So I’ll go back and try again tomorrow—but I feel REALLY good that I did the right thing, and that Toodles evidently agreed with me.