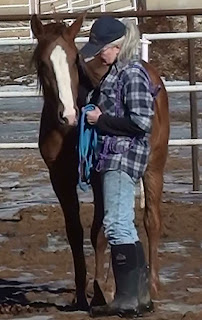 The horses are helping me--challenging me--to rearrange my psychic space lately. It is exhausting. There are days when I arrive home just shaking from fatigue--and it's not because the work is physically challenging--it isn't. In fact, I'm gaining weight!

The intuitive side of my nature--that part of me that receives information from non-rational sources and just knows things--is growing stronger as I interact more and more with my equine friends. And that's the part of my psyche that I've suppressed for most of my life. My dad, after all, didn't believe in that stuff. If you can't see it, feel it, and measure it, it didn't exist.

Furniture that's sat in one place for fifty or more years--whether it's psychic or real-world--tends to kind of grow into its space, and it seems to get harder and harder to move. So I suppose it's no wonder I'm so tired lately.

Still, I wouldn't trade this experience for anything in the world. I welcome these changes, difficult though they may be right now. I like the person I'm becoming--and the horses seem to agree.

[If you want to read a more psychological account of this, you can check it out on my other blog, It's An Alchemical Life.]
Posted by Kay at 6:06 PM No comments: 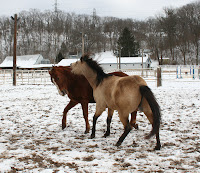 Well, not completely without horses, of course, since I have my own to care for. But I've been away from the Ranch for two weeks now.

The first week was weather-related--the Midwest has had the worst, snowiest, coldest winter I can remember, and my little car doesn't handle snow and ice very well. The ice on the ground has also meant that I couldn't actually do anything even with my own herd, which was very disappointing.

So this past week I was home most of the time, writing. And what a week it was! Our public clinics at the Ranch, which I helped advertise, are filling up all the way through June. Our internship program has three new potential applicants, and we're making good progress on getting our "mission statement," goals, and program details worked out. Finally, I got a training article accepted in a local horsemanship paper.

A great week! It's nice to feel like I'm helping to get the word out about our work at the Ranch, and especially about our way of working with horses that's based on relationship, not on dominance. So important, that. If the whole world operated from a place where relationship counted as much as power and control, we'd all be safer and happier.

Glad to be doing my little bit for the cause with my writing. But I sure will be glad when Monday rolls around and I can get back to working with the horses!
Posted by Kay at 2:30 PM No comments:

I got a call this morning from the "principal's office at school" (read, "my friend the barn manager"), who said Galahad was acting up.

Apparently he woke up this morning and decided he was a stud again, despite the fact that he was gelded over a year ago. He charged my friend when she went to bring her own mare in from the pasture, and then herded all the other mares into a frenzy, galloping them around the field. Who knows what other naughtiness he got into. My friend didn't say, and I'm sure not going to ask.

He's been living with the mares because he and the Boss Gelding got into a terrible row on his first night out with the boys. Galahad got scared and backed into and through the fence, taking it down with him. Fortunately, I happened to go out to check on him that night and discovered him wandering down the lane, distraught, and put him in the barn. The other boys had stayed in the pasture but couldn't be left there, obviously, with the fence down, so they all spent the night locked up in the barn.

All the horses have been indoors the last few days because of the blizzard, so I'm guessing that Galahad's friskiness is a reaction to having been cooped up. That, and the fact that one or more of the mares is always in season these days, and spring is coming, despite the snow and ice.

The report is that he did fine with the geldings today, though they put him back with the mares until tomorrow, when they'll try again.

I never, ever thought I'd have to deal with phone calls from school....
Posted by Kay at 3:43 PM No comments:

The Broncho That Would Not Be Broken 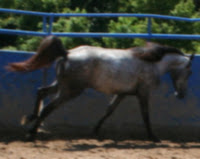 A poem by Vachel Lindsay, which I read when I was very young, has stuck with me for more than fifty years. I went looking for it just now, as I was working on a piece for this blog on the ethics of horse training. It still brings tears.

I'm not sure about copyright laws here, so I'll just post the link to one of the many places you can read this work:

http://www.poemhunter.com/poem/the-broncho-that-would-not-be-broken/
Posted by Kay at 12:03 PM No comments:

“Laying a Horse Down”

Jay and I have had many discussions of this process, which is a technique often used by natural horsemanship trainers.
In my mind, “laying a horse down” is part of the old-school, cowboy method of breaking an animal. I’ve never seen it done, but I’ve seen photos and videos of some of the old methods, and they’re pretty horrific. Jay has tried hard to convince me that, in the right hands, the process can actually be of benefit to the horse.
I couldn’t get past the apparent violence. Forcing a terrified animal into such a vulnerable position can send it into a state of dissociation that’s basically the same thing that happens to an antelope—or a horse—just before it’s eaten by a lion. Some horses never return from this deadened state. After the experience, they really are “broke,” and you can do anything you like to them. There’s no spirit, no fight. They’re automatons.
To me the technique, and indeed the entire idea, reeked of coercion and violence. It recalled experiences from my own childhood that I would very much like to forget. So I argued and argued, but finally agreed to watch Jay work with a horse before making a final decision.
Jay’s method and his reason for laying a horse down are very different from those of the old cowboys. In part, it is teaching the horse to obey. That’s undeniable. But Jay’s other reason, especially with a fearful horse, is that persuading the animal to do something that puts him in such a vulnerable position, and then showing him that it’s not just safe but relaxing, can change the animal’s view of the world. Once the horse has done the scariest thing he can imagine, only to discover that it’s safe and he gets rewarded for it, it will be easier for him to handle other fearful things.
“Teaching the horse to lie down” requires, first, that you have built up a relationship of trust with the horse. Second, it requires impeccable timing, because you have to reward the horse’s smallest effort and slightest try toward doing what you’re asking. Third, it requires enormous patience, because it might take the horse an hour to understand what you’re asking, then another hour for you to convince him that it’s safe to do it. All the while, your energy must stay calm and relaxed.
The other day I watched Jay lay “Roger” down. Believe me, I was watching that horse for any sign of distress! I didn’t see a one. It was stressful and difficult for the horse, no doubt. He was breathing hard, but he wasn’t upset by any of it. Jay took it in small steps, and rewarded Roger for each move in the right direction.
When Jay would let Roger rest and think about the step he’d just taken, often I would see the horse licking and chewing, a sign of relaxation. His head always returned to its calm, resting position, and his eyes had a relaxed look to them.
The whole thing took maybe half an hour. I wish I had a photo of Roger lying flat on the ground (this photo is Sue, who now lies down with just a suggestion). He was completely relaxed while Jay petted his neck, his back, his rump, his belly, his face. It was amazing.
Then, after Jay asked him to stand up again, Roger quietly moved right over to stand next to Jay, nose by his arm, looking  (I swear I’m not making this up!) quite pleased with himself. He seemed happy to have done a good job.
I suggested Jay not call it “laying the horse down,” because what he’s really doing is teaching the horse that lying down on command is a safe and pleasant thing to do. Yes, the horse does, in fact, have to do it, but the way Jay does it, the horse is rewarded at each little step, so that the whole process is not unpleasant for him.
So I’m finding I have to rethink my knee-jerk reactions to techniques. “Laying a horse down,” when done by someone operating within the old, dominance-based paradigm, is a dangerous and inhumane thing. Done by someone who understands horses deeply, communicates clearly and consistently with them, and has their best interests at heart, “teaching a horse to lie down” can actually make a horse feel better about himself, and trust his environment and his handler more completely.
I would guess that with one’s own horse, a horse with whom you already have a trusting and respectful relationship, it would be OK. But still, I’m not going to try this one at home.
Posted by Kay at 5:39 PM No comments: