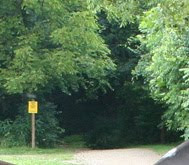 Well, I always said I'd probably fall off that horse and crack my fool head. I WAS kidding, but no, I've actually gone and done it.

Monday around noon I went by the barn to feed the horses. Got Galahad out of the pasture to put him back into his stall where it's cooler, and decided to ride down to the creek to get him a drink before putting him away for the day. We were only going to be gone for a few minutes, so I didn't put on the saddle or my helmet.

We made it down to the creek just fine. Galahad wanted to eat clover and I was paying attention to him wanting to eat clover and neither one of us saw the woman coming across the creek until she jumped from the last rock and made a big splash. Galahad, convinced she was coming to eat him, spun around on one hind foot. I had no time to react and so I did NOT accompany him on his spin, but fell off the other side. I landed shoulder-first but my momentum spun my head around and it collided with a small rock.

Galahad was very concerned when I didn't get up and yell at him--he kept coming over and nuzzling me to get up. When I managed that, I led him over to a bench and told him he HAD to let me get on, that it was very important for me to get back to the barn. Usually he fusses; that day he stood like a statue while I clambered on.

We made it back, I put him in his stall and iced my head, then decided to drive home. On the way there I realized I was only seeing part of what was in front of me, so I decided to head for the emergency room. I really got scared when I stopped at a traffic light to turn left and an oncoming car VANISHED. I mean, one second it was there and the next second it was NOT THERE. So I waited for the green arrow, said a prayer, and made it to the ER.

All seemed well. They did a CT scan and an MRI and were figuring on sending me home, because I seemed fine other than a little headache, mostly from my neck muscles. Then about 9:30 at night the ER doc comes smiling into the room and says cheerfully, "Wow--I'm shocked! You have a skull fracture!"

So anyway, they kept me in the ICU overnight for observation, hooked up to every beeping machine known to medical science, and came in every hour on the hour to shine a light into my eyes and poke and prod me for a while. After another CT scan and many more hours of waiting, the neurologist came in to see me and sent me home with orders not to ride for two months.

Good news is that I'm apparently OK--visual field disturbances are gone, most of the headache is gone, and all seems to be functioning normally. I'm mostly just worried that if I sneeze, my head will explode.

I'm enormously grateful that I'm not still lying in that ICU bed, unconscious and brain-damaged, as I very well might have been. A new "helmet law" has been passed around here, and the word from all my wonderful friends is that it WILL be enforced. I love you guys! Your friendship and support means the world to me.
Posted by Kay at 3:32 PM