A Changing Relationship With my Horses, Part Two: Galahad 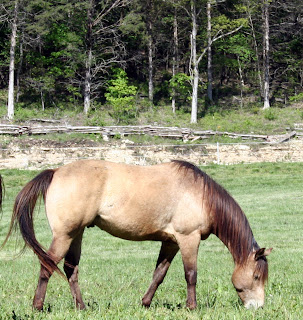 
The other day I walked out to the pasture on an unseasonably hot afternoon. Galahad left the rest of the herd standing in the shade and came over to me right away.


I stood there and just stroked him for a while. The big, blue-eyed Paint threatened to come running over and chase him, but I got between them and waved my rope; the Paint suddenly discovered a very tasty clump of grass. I kept walking toward him, though, casually swinging my rope until he decided to leave in a hurry. Galahad, as usual, was watching with big eyes. “Wow! Did you see that?!” My big, gentle guy is pretty close to the bottom in the herd’s social structure.


The flies were miserable, and Galahad was clearly grumpy because of it. He kept moving his hindquarters closer to me, which is unusual for him, and “pointing” at his belly with his nose. He was pretty clearly asking for help with the flies. I offered the halter and he stuck his nose in it.


He wasn’t keen on walking anyplace very fast, but we eventually made it to the barn. It’s not like I was in any kind of hurry. I tied him to the hitching post, cleaned his feet, and put lots of bug spray on him (though it was only the herbal one, which lasts approximately five minutes). Then I put Desitin on his underneath parts again. He likes the feel of that—I think it’s soothing, and really does keep the flies off for at least a day. There were a couple of ticks, too that I got rid of for him.


Then we went into the small arena, where I started teaching him to step sideways over a downed barrel. Some of our horses at the Rescue Ranch actually like doing that. Galahad? Not so much.


He did it once, after much coaxing. I instantly walked away as a reward, then raved over him, gave him a cookie, and everything. He looked quite pleased with himself. I decided to see if he’d do it again—his pouty face came on, and suddenly the flies became even more unbearable. I admit to pushing him harder the second time. Finally, he did it again, but not willingly. I ignored that, fussed over him again, and took his halter off.


He didn’t even want to roll. Instead, he started yawning, pointedly, non-stop. “This is SO boring.” I laughed, walked over toward him with the halter held out, and said, “Are you ready to go?” He stepped right over and stuck his head in it. My boy is a clear communicator; I’ll say that for him.


After that, we walked up the hill, past the new, scary ducklings in the little shed. Galahad wasn’t nearly as unnerved by them as Midnight had been earlier that day, but still, it was something to wake a guy up. Then we came back, had a treat, and I rode him back down to the pasture. Good boy!


Interesting: our relationship is changing and Galahad clearly notices it, so he keeps testing me to find the new limits. And I’m still figuring out what those limits are—it’s a moving target, and, like any relationship, will always exist in a state of dynamic balance. But I feel like I’m seeing him as a fellow being now, not just as a horse. It’s worth the effort.
Posted by Kay at 11:16 AM