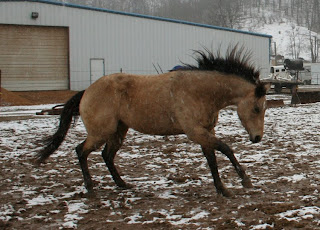 I had an unexpected audition for the rodeo this afternoon. Don't think that'll be my next career, folks.

This photo is the only one I have of Galahad doing anything resembling a buck. It happens rarely enough that I've never caught him at it with my camera. Now, I'm going to make a point of it!

It was a hot, windy spring day today, and Galahad, after his visit with the chiropractor last week, is still not allowed out in the pasture with his buddies. I expected a bumpy ride when I took him out, but nothing quite like what I got.

He fussed all the way out, wanting to eat grass and run. I really do wish we could let the horses run wild around the big, grassy fields in the conservation area near the barn, but that's not allowed. So I asked him to behave himself. And since we're only supposed to ride him "gently" this week, I asked him to walk. Hmmm....

We went along the path that leads through the woods, where we encountered several deer. Oh boy--let's chase them! Um, no. My bitless bridle gives me just enough leverage to crank his head around so that he'll stop. Once he quit prancing, we walked on.

Then, near an open stretch, he reared. Well, that was fun, sort of. It's actually not difficult to sit on a rearing horse. You just kind of lean forward to keep yourself vertical, and the back of the saddle helps you stay on. Once he came down onto all fours again, I cranked his head around the other way until he stood relatively still. Then we walked on.

We did a lot of circles on the way back across the flats toward the barn, and all seemed to be well until we hit the last stretch of open grass. I guess he just couldn't stand it any more--the smell of all that greenery, the wind, the fresh air.

I actually didn't know that Galahad would or could buck with someone on his back, but yes indeed, he can. I'm not talking crow-hopping, folks. I'm talking all four feet in the air, land on the front feet, and kick up the heels kind of bucking. The kind you see in rodeos, only (thank goodness) nowhere near as vicious.

Three cycles; if he had gone for four, my butt would have been in the dirt. As it was, I lost both stirrups and was hanging on more like a tick than an equestrian. But I did stay on, and when he came down that third time and stopped, I got his head around to the side one more time. We stood there, both of us breathing hard, for a little while.

I made him walk a little farther, then stopped and got off to check the saddle, in case there was something wrong in that department that was bugging him. Nope. So we walked for a while, then I got back on. Thankfully, I've learned how to get on this tall horse from the ground, without needing a bench.

He behaved pretty well after that incident. I got him back to the barn, got the saddle off, and then started to shake and feel sick to my stomach. But hey--he didn't win this round, either!

I am amazed at myself. Only a few months ago, this incident would have terrified me, even if I had managed not to get thrown. Now, looking back, I wonder where my calmness came from this afternoon: I never raised my voice, used only enough pressure to get him stopped, and for the most part "sat happy," as my friend and trainer Scott likes to say. Wow. Wow....