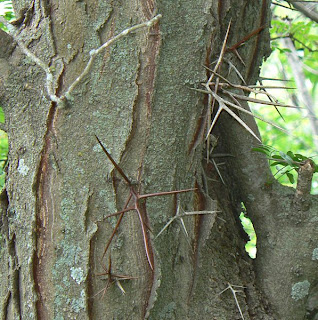 This morning’s trail ride was interesting, to say the least.

I’ve taken to riding twice a week with a group of women who ride gaited horses. Why they invited me, with my plodding (relatively speaking) quarter horse, is beyond me, but they did, and I accepted. At this time of the year we stick to the flats, because the rocky hills and uplands are icy, muddy, and treacherous.

The ride started out fine. The trail still has some icy patches on it, though the ground isn’t hard frozen any more. We were trotting nicely along the flats, keeping up with the quick-stepping gaited horses. Galahad’s slow trot is lovely and easy to sit, so I really enjoy the opportunity to let him practice keeping a steady gait like that. Every time we go out, he gets better and better at it.

At the first fork, we took the trail that leads into the woods for a while before emerging into another meadow. Galahad, who’s barefoot, didn’t like the footing—neither the icy patches nor the gravel—and twice refused to move forward across a rocky patch. The first time I managed to get him going again, but the second time he stopped completely and wouldn’t move forward.

When I turned his head and urged him on, he refused again, then headed uphill, off the trail and right toward a big honey locust (Gleditsia triacanthos). These native trees are gorgeous, and an important source of food for wildlife, but the thorns on the trunks are fearsome: up to six inches long, branched, and viciously sharp. The picture, from Wikimedia commons—I haven’t been up there with my camera in a while—will give you an idea of what it looked like. Those spikes were right at Galahad’s eye level.

He stopped, thankfully, about two feet away from the thorny trunk. It was a strange moment for me. I knew I had to remain absolutely calm in order to control him and back him away from danger. If he spooked forward because of something I did, he could lose an eye.

At first I tried to turn him to the right, away from the tree and toward the trail, but he started to shy again. I held him still for several seconds until he calmed down, and then was able to back him up, a step at a time, until we had enough room to maneuver. Finally, I got him back onto the trail.

About that time my companions came back along the trail looking for us. “You should have yelled!” said one of them. Sorry, folks, but I didn’t have time to think of that….

We turned around and continued our ride. The only other discussion Galahad and I had seems terribly minor, after what we had just been through, though even a few days ago I would have been worried by it: He wanted to go eat grass out in the meadow, and I wouldn’t let him. This time, when he started to dance off and I pulled his head to the side, he took a couple of steps and then stopped, gave a big sigh, and agreed to move on quietly. Good boy.

So we escaped disaster once again. Whew…. My guardian angels were looking after me today.

(Photo from Wikimedia Commons)
Posted by Kay at 6:06 PM